PhD student in Developmental and Psychological Sciences at Stanford University

For my MS thesis, I want to explore how poverty may affect learning and memory by exploring alternative means of inducing stress in both teens and adults. Inspired by Drs. Eldar Shafir and Sendhil Mullainathan book, I wanted to adapt the experimental design from their original study done in 2013 and modify them to a reward learning paradigm and for an adolescent population.

In their original experiment, Mani et al. (2013) asked New Jersey mall shoppers to review 4 hypothetical financial scenarios prior to engaging in a cognitive task. An example of a hard and easy (value in parenthesis) scenario is provided below:

The economy is going through difficult times; suppose your employer needs to make substantial budget cuts. Imagine a scenario in which you receive a 15% (5%) cut in your salary. Given your situation, would you be able to maintain roughly your same lifestyle under those new circumstances? If not, what changes would you need to make? Would it impact your leisure, housing, or travel plans?

After thinking through 4 similar financial scenarios and completing the task, the experimenters wanted to observe how performance would have differed based on the difficulty of the scenario (a hard financial situation versus an “easier” one) and how this differ based on income. Below is one of the figures reported, which highlights that accuracy was only affected in low-income participants if they were exposed to financially difficult questions. 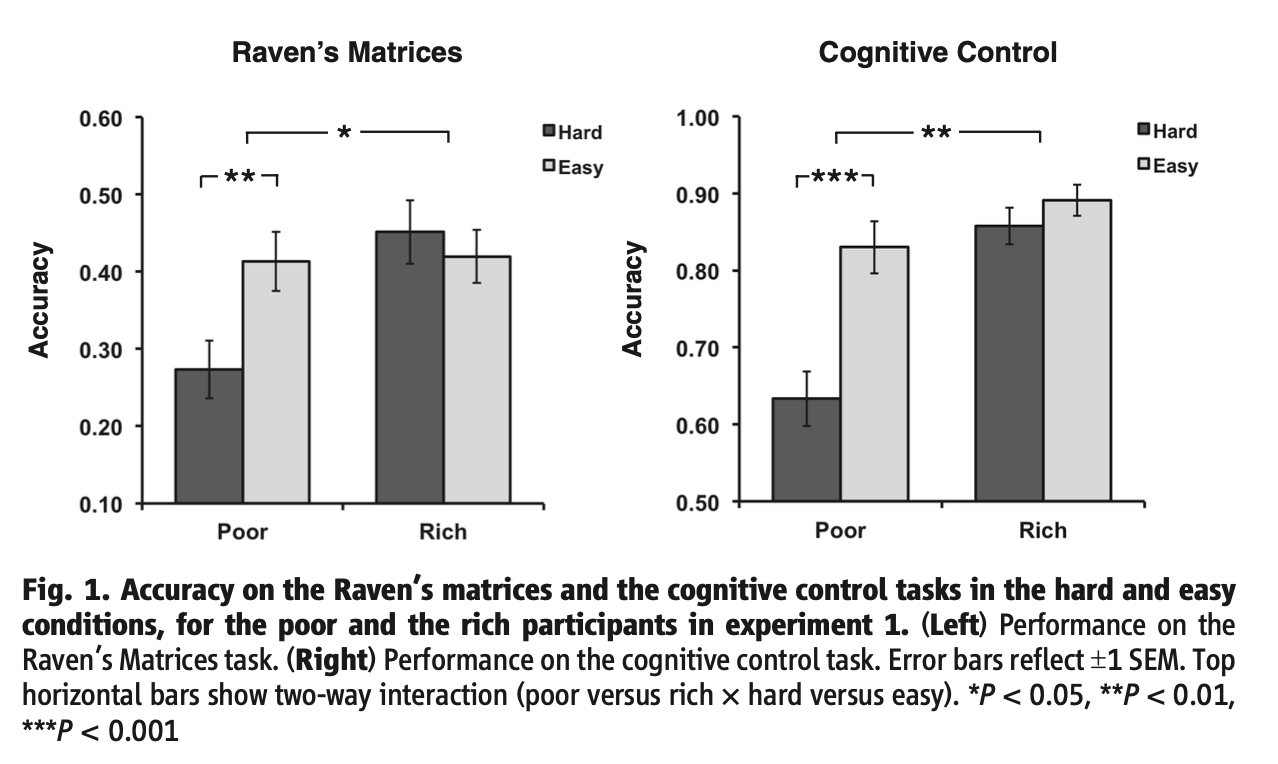 While the 4 scenarios from this paper would be terrific additions for my thesis project, they are not exactly applicable to a younger age group. For example, the above scenario is only applicable to demographics with jobs and them relying on their employment to meet basic needs. Thus, students in high school to think about how a 15% pay cut would affect them may not induce the same level of stress as it might if I asked their parents 1.

That is why, for the first part of my thesis project, I’ve designed some age-appropriate scarcity scenarios! The following table includes the initial draft of my scenarios:

All of these are currently in their draft stage, and prior to incorporating them into a behavioral task, I will be distributing them for some initial data on how stress-inducing they are by age and family income level. The hope is that this will provide some support that they have a similar impact as the original scenarios did in the 2013 paper. And, if this works, these could be useful to explore in a reward learning task and maybe with some neuroimaging designs (which, to the best of my knowledge, has not been done as much? 2).

You may also enjoy

This is a draft page! Content here is a work-in-progress and will be changing drastically over the next few weeks

I got to teach my first college-level course for students!! I created my own class — in which I taught Cognitive Neuroscience! — and I taught a group that al...

On May 6th, I made the official announcement that I accepted Stanford’s PhD offer and won the Knight-Hennessy Scholarship. This was a surreal experience cons...

Reflections on Ph.D. applications part I

I am very pleased to announce that… I APPLIED TO PH.D. PROGRAMS!